Oil discovery at the Goddo prospect, on the Utsira High 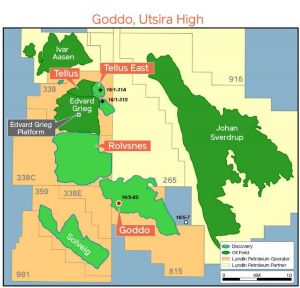 Concedo holds 20% interest in PL 815. Please find below the press release issued by the operator, Lundin:

The main objective of the well was to prove oil in porous basement similar to what is found in the Rolvsnes discovery to the North West. The well encountered weathered and fractured basement in an estimated gross oil column of 20 meters. Extensive coring and data acquisition was performed and the reservoir displays similar characteristics as found in Rolvsnes, but the two discoveries are not connected.

The preliminary gross resources from this well are estimated to be between 1 and 10 million barrels of oil equivalent (MMboe), however there is clear upside potential in the larger Goddo area and surrounding prospective basement.

The forward appraisal and commercialisation strategy for the Utsira High basement play will be based on evaluation of the production performance from the Rolvsnes extended well test where production is set to commence in mid-2021, as well as the information collected at Goddo and surrounding well data. Two horizontal wells in the northern part of the Edvard Grieg field already have production contribution from basement, and the Tellus East discovery announced earlier this year has similar reservoir to Rolvsnes and Goddo and will be produced as part of a future Edvard Grieg infill programme.

The Goddo well was drilled by the Leiv Eiriksson semi-submersible drilling rig. Lundin Norway is the operator of PL815 with a 60 percent working interest, and the partners are Concedo and Petoro with 20 percent interest each. The Leiv Eiriksson rig will now be used by operator ConocoPhillips Skandinavia for a three well exploration campaign to the North of the Utsira High. Lundin Petroleum has a 20 percent working interest in two of these wells; Enniberg and Hasselbaink both located in PL917, due to spud in Q4 2019.”